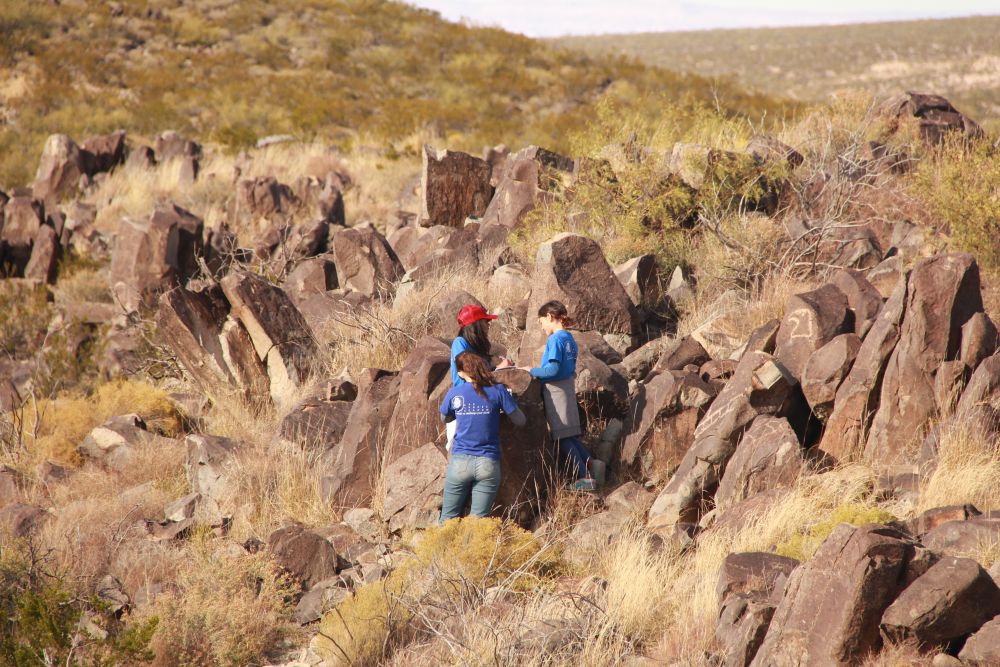 What a beautiful, sunny, mild, and very educational day we had at Three Rivers Petroglyphs site in the Tularosa Basin north of Alamogordo. From about 400 AD to 1400 AD, Native Americans lived here. Among other pieces of their life story, they left over 21,000 petroglyphs, designs of all sorts chipped into the desert varnish on thousands of rocks.

Almost all of our students were able to make the trip, along with four teachers, more than a dozen parents, and grandparent Margaret Berrier. Margaret, a retired professional, a published archaeologist, and now a jeweler (who, fittingly, derives inspiration for many pieces from Native American designs), arranged the visit with the BLM, who provided three great guides, Ward Beers, Trinity Miller, and Eileen (last name?). Margaret had also prepared the students earlier in the week with a presentation at the school that all enjoyed.

A two -hour drive by parents and teachers generous with their time and car use brought us to the site. After we counted heads and made two groups of students, Ward demonstrated knapping rocks to make blades out of chert as well as showing his earlier work in obsidian. He readily cut meat with a new blade, then showed tanned hides and sinews for many uses.

Ward continued our foray into past lives by showing us how to throw spears with atlatls, a technology used in the past by many cultures from Aztecs to Australian aborigines.

Trinity guided us to remnants to habitations, now fallen into stone-ringed hollows. They were located near three now-tiny ephemeral streams that had been rivers in wetter days of old.

We had lunch and a bit of play, and then Margaret led us up the ridge to the petroglyphs. The rocks all along the ridge were arrayed with images of diverse types – geometric designs, animal figures, human faces. We were awed by it all and spent a rewarding two hours; most glyphs were very apparent, while we had to look carefully to find others and appreciate them.