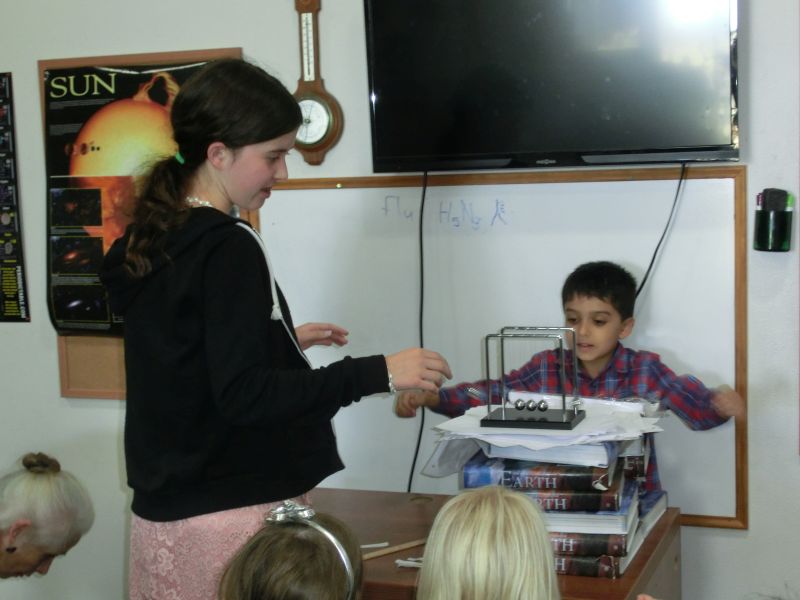 30 October 2017.  The middle-schoolers treated the 1st- and 2nd-graders to a demonstration of how motion (momentum, to be more precise) is exchanged among colliding steel balls.  After a goodly amount of planning and testing, they brought Newton’s cradle to the front of the classroom.  Newton’s cradle is a set of 5 steel balls hanging by light monofilament line.  At rest, all 5 balls lie in a straight line, touching each other.  One can then take any number of balls away to the side and release them, in order to watch the responses of all the balls, those released and those initially at rest, upon collision…and re-collision, and even more collisions.  One can even take balls from both sides, and one can take the balls to different distances, giving them different initial speeds.  The young students were fascinated, as each one got to do a different demo with a different number of balls and distances.  The final demo was making two balls at one end act as one ball by sticking them together with a little clay, then taking a third ball out twice as far in the other direction and letting them collide, with a bit more clay to hold them together.  Two balls at one speed collide with one ball at twice the speed; the two momenta cancel and the balls end up at rest in the middle!